Journey To The West

Delhi. Believed by some to be one of the oldest existing cities in the world. Delhi is intense. The whole trip I've been psyching myself and Alex out about Delhi, going on and on about how dirty and confronting it is. Last trip to Delhi, with Yotam and Naomi, about four and a half years ago, didn't go so well. This time we sort of eased everyone into India. Starting at Shalin's family in Ahmedabad was key, then going on to Goa and Kerala. Finally, the big and grimy cities. Bangalore was the first big, dirty, Indian city we visited, and Alex looked at me with disbelief when I put on sandals to go outside, thinking shoes were the only rational, hygienic, option. 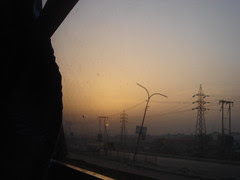 We arrive in Delhi at dawn, after traveling all night long on a cramped "sleeper" bus. The air pollution creates some pretty wicked looking sunrises here. Well, maybe you don't always get to see the sun, but the morning color patterns are pretty nice. 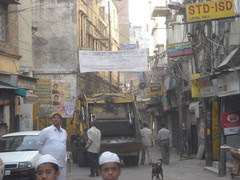 Delhi is dirty, but not as much as I remember. And what is this? An American looking garbage truck removing trash from the city! Holy shnikees! 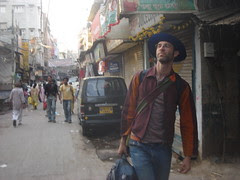 Anyhow, here it is, one of the most intense Indian urban experiences, Paharganj, Delhi's main bazaar. No trip to India is complete without entering the belly of this organism, also the central backpacker hangout of Delhi. 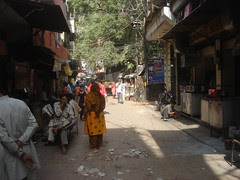 We've only scheduled two days and one night in Delhi, since we're not really intending to chill out here. Delhi also happens to be one of the best places in the world to shop, since there's so much great stuff, and it's so cheap. Everything from all over India is here. We haven't really bought anything during our travels, since we didn't want to lug it around with us so much. Now is the time to carpe the shopping diem.

What ensues is a kind of Nickelodeon inspired shopping game show. We have 20 hours of shopping craziness, rushing through Delhi's bazaars, dodging cows, poo, massive quantities of people, cars, auto rickshaws, and traffic, bargaining, carrying, trying on, and acquiring what we want within a very limited time frame. Ready, set, go! 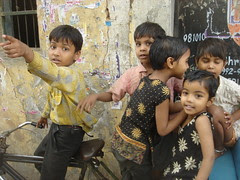 Our first acquisition target is these children. Unfortunately, their commanding cuteness renders them totally out of our price range. We're not totally out of luck, as we discover that our guest house has an anime only channel, so we get our fix of cuteness from other sources. We watch a ton of this in the evening. 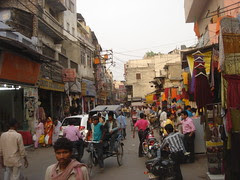 Note to future generations: better to come to Delhi not in the middle of the summer, as it's less hot, humid, and uncomfortable. Delhi is so much more pleasant this time around. 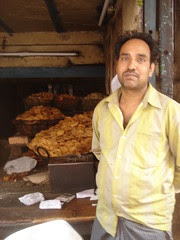 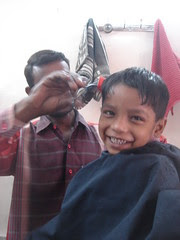 In fact, the warmness here is incredible. Delhi, all of a sudden, and Paharganj is one of the most charming, friendly, and warm places we've been on the entire trip. Alex and I get our obligatory shave and haircut jobs. This kid had a huge beard, but the barber was totally up to the task of shaving it off. I failed to get before photos, unfortunately. 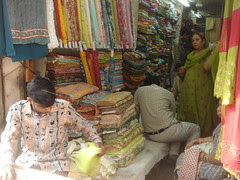 This is where Delhi shops. An explosion of colors, people, and things. 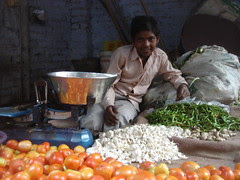 Clothing, food, decorations, suits, shoes. Stuff. Lots of people and the lots of stuff that lots of people need. 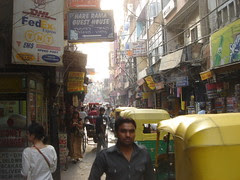 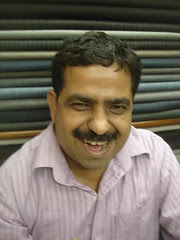 We decide to have suits made. Our plane leaves in about 30 hours. Luckily, this man and his crack team of tailors is up to the job. We get measured, pick out a bunch of stuff, specify and design, and go out in search of a well deserved lunch. 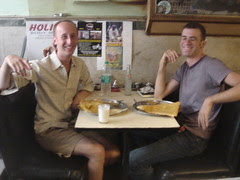 Her name was do-sa, ma-sa-la do-sa. We stop for dosas, one of the most important inventions of the past thousand years, along with gravity, youtube, and sliced bread. But dosas are so much better than sliced bread. We make a point of getting south Indian food, but especially dosas, in north India, since they're so ridiculously good. I resolve to marry a dosa, one day. Of course, I have to meet a lot of dosas to find the right one. Usually, after we meet, there isn't much room for the relationship to develop. Such is life.

Note my spiffy threads. The tailer gave me this cool safari shirt to wear while he borrowed one of the shirts I bought in India, in order to copy it for me. Of course, we are on safari, and I'm sure he was sensitive to this fact. 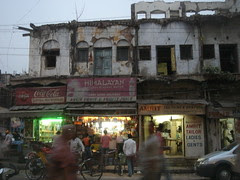 In the evening, we head off to another market to acquire some India-modern Western style clothing. I think India will one day be the international fashion capital of the world. During my life time, I think.

The Delhi metro, which we take, is awesome. Aside, perhaps, from Japan, it is one of the nicest and most modern metros in the world. 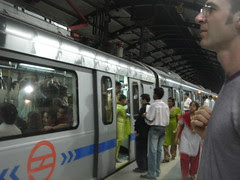 You buy little tokens to ride, that seem to be RFID, so you just swipe them to enter the system. It's interesting how people behave totally differently on the metro than on Indian trains and in the streets. People don't climb over the tracks, go in and out of windows, push and shove as much, or throw trash everywhere. Because, like, you don't have to. A lot of India's infrastructure, trains and cities, are a kind of Alice in Wonderland design exercise, exercises in absurd design, and how human behavior will stretch, bend, and adapt to maximize what is there. For example, it is more efficient to walk over the tracks in many train stations, and throw trash in the street, since there are no trash cans. In modern parts of Delhi it isn't unusual to find cross walks heading straight into walls that divide them from the sidewalk. No wonder people will climb over them, and so on.

The Delhi metro proves Bucky Fuller's point about design and human behavior. It's much easier to simply change people by changing the environment, than to change people's behavior directly. The metro doesn't encourage the behaviors we saw in India's train stations. It encourages a different set of human actions. And it's not that the metro excludes poor people or anything like that, it is quite cheap, though you do have to have a ticket to go inside, which is different from most train stations. 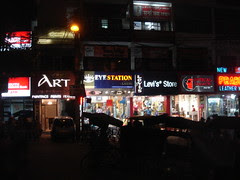 Delhi also has some more modern and Western feeling shopping areas. Some shops, like Levis, have western sized prices attached to goods, which is quite shocking. We find more Kashmiri goods stuff here, still confusing and expensive, but some of the most lovely handicrafts ever made by human hands. I understand that Kashmir still makes items that were originally made at the height of the Persian empire. 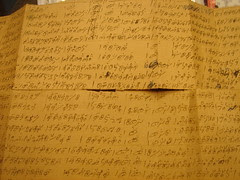 The shopkeeper Alex and I get our Kashmiri goods from gives me this codex of weaving secrets. It's the machine code of a carpet, the symbols that the carpet designer specifies and the weavers interpret. Apparently they can also be sung, and so communicated, and synchronized across multiple weavers working on the same carpet. It's the human sing song of a computer's communications bus. The high speed chirping of bits and action that make things out of simpler elements. 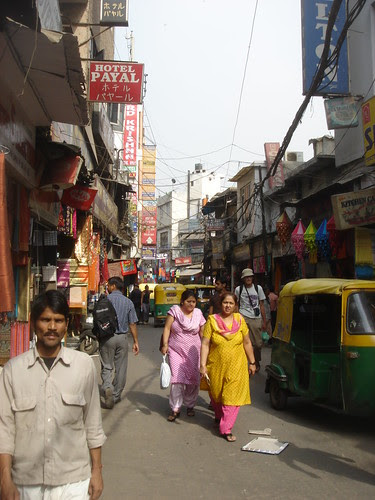 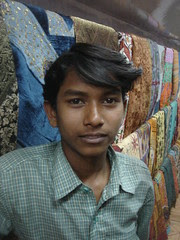 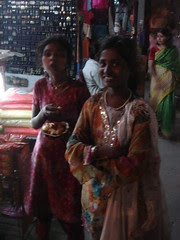 Some folks who joined spaceship earth more recently than I did. The girls on the right are beggars. 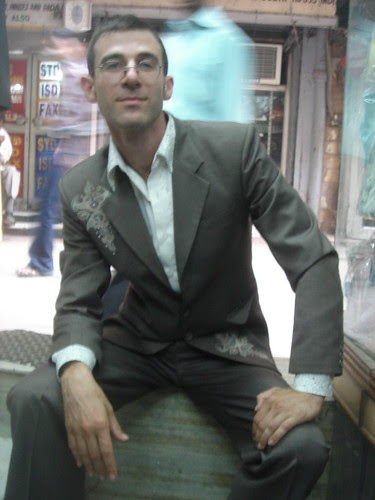 On the next day, we return to the tailor's shop to fit our clothes. 24 hours after giving him our order, the clothes start trickling in, and we do some fine tuning.

Here is alex as a Calvin Klein model, his next logical career move. Throughout our shopping experience, the tailor keeps enthusiastically ranting about how he's going to make us into sexy, sexy, men. I give you maximum sexy! We need more sexy! He's a bit like Scotty on Star Trek, always amping up the power. One jacket he sells me includes, as part of it's pitch: feel how soft the material inside is, soft like the inside of a woman's bra, ba ba zoomba! 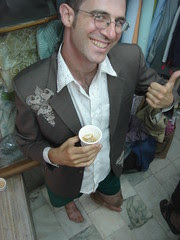 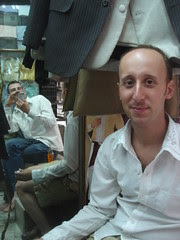 Above, Alex trying on some stuff in his boxers, in plain sight of one of India's busiest bazaars. Wassup! Here is yours truly, modeling a shirt he has already purchased. I get it replicated, or an approximation thereof, twice, once with the colors inverted. 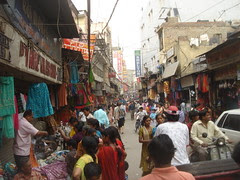 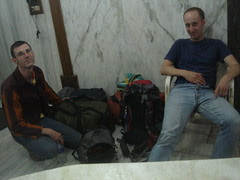 Here we are, checking out of our hotel after an exhausting 30 hour shopping spree, and multiple months in India.

Despite entering some kind of shady taxi arrangement with our hotel to get to the airport, checking in goes smoothly. I make it through security first, in time to spend my last rupees on dim sum. Chinese seems to be second favorite meal on the sub-continent. I wait inside for Alex, and he shows up in time for me to pass along the wisdom I have gained ordering from the dim sum stall, and we say goodbye to one another. See you on the other side! 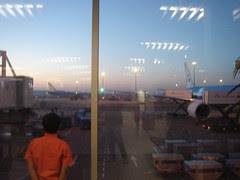 I have a hangover in Amsterdam's airport, pictured above. Alex's is in Belgium. 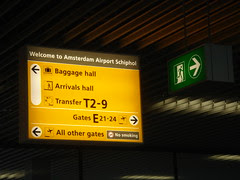 Thanks for tuning in! This is the end of Phases Crossed. Perhaps next time you can follow us on our adventures to other planets, strange bodies that have yet to be discovered, marvelous deep space ice filled caves, the slimy insides of Jurassic dinosaurs, our time travelin', phase shiftin', cross liftin', and cross dressin' escapades, and all the new stories we will write about, when the time comes, and the world is ready. 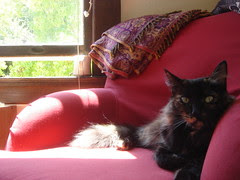 In the mean time, I return to Berkeley, and slowly float back down to earth. Here is Sabine, chillaxin in my new Berkeley office. What's up!

comments about the subway bring forth my following comments: you'd like the book turning points, by the author of blink. i simply adored blink and turning point was more intense. he talked about how new york city was cleaned up. neighborhoods that were slummish, drug infested, etc. he started cleaning up the subways, getting rid of the graffiti. it would get repainted and he would imediately remove. this started giving the people in the neighborhood a better feeling and things just went up hill.
Welcome back to planet earth.