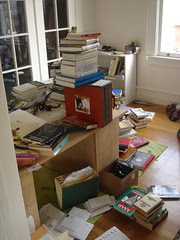 Packing books in my room... 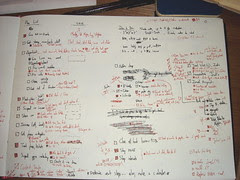 Ja Mon. My apartment is clean. And empty. Aside from packing every piece of underwear I own, except the one worn by yours truly, into storage, putting my life into storage went smoothly. Everything I own was marshaled, serialized, and packetized into this big blue box that descended from the sky into the street in front of my house. Then, one week later, just as miraculously as it had appeared, it vanished. In the future, I will again summon this strange and awesome power, and have the box dropped off at the time and place of my choosing.

In Star Trek, they teleport people by disassembling them into atoms, sending them across some kind of sci-fi matter/data pipe, and reassembling the bits at the other end. So it is with my stuff. And my life. We are shipping to a future time and place. Sometimes things are mishandled in transit, for better or worse. Hopefully only positive mutations occur.

In the first photo, you can see the beginning of my packing efforts. Little did I know this was only the first 1/10 of a percent of the work. Moving out is a ton of work. Ugh. Luckily Sharon, Tim, Alex, Hans, Jack, and Lydia all helped tremendously. Sharon was even visiting from out of town, on vacation. I warned her I wouldn't be a good host, since I would be watching my life spin around me in a cyclone, standing in the calm center, as things were sorted in a huge centrifuge of my own making. But she came from Atlanta anyway, and helped me pack. At right is an old picture of the todo list I started when I began this trip, deciding to take it, anyway. It's chaos, and almost all checked off. Yes! I've learned something about being a producer, I think, in the last four years.

I've been staying at Tim's place, which has been tons of fun, and super sweet of him. It helped with the apartment separation anxiety, too. I also crashed at Hans's place one night, but the story of Sabine (his cat) and me will have to wait until later. Tomorrow I review the apartment with the landlady, and drive to San Carlos to spend New Years with Cat. Cat has graciously offered to watch my car for the next few months, and ensure it doesn't get into any misadventures, or take any rides with strangers. Then, on Jan 1, I fly to Tel Aviv, to meet Anya & Nadav, who some of you may remember from last year's international travel blog sensation, Big Katamari. I'll spend a week with them, then a week with my aunt Rina, before continuing onward to chart the mysteries of the sub-continent.
Posted by Chaim Gingold at 6:43 PM 2 comments: 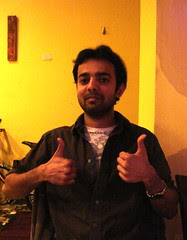 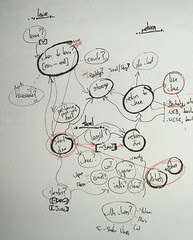 What to do?
Originally uploaded by Chaim Gingold

Sometimes things start in unlikely places. This is my good friend Shalin. He's really cool, and only partially because he's from India. Last night we had dinner at Namaste on telegraph. Double thumbs up to the food, or something. We were talking about Ahmedabad, his hometown, because he's traveling there this weekend, and I'll be visiting his family later on in this trip. Also, our friends Dan & Sarah will meet him there. Awesome.
"Excuse me," says the lady at the table behind us, "are you talking about Ahmedabad?" Well, yes, we are. Turns out she and Shalin are from the same hometown, have lots of friends in common, but don't know each other. It's a small world, earth, and a nice place to visit -- just don't drink the water, since the people who live there have poisoned it. Soon we'll all be friends on facebook.
Shalin suggested that this trip needs some backstory, explaining why I'm doing this, so here I go, part one of N. The ultra-condensed back-back story is that it's been over four years since I finished my MS, and have been working for EA. I intended to start a new project, take a long trip, and leave EA after Spore was in the box, but a few complications came up. First, the game kept slipping, while the editor design, which was my main contribution, was basically done. And I was awesomely bored at work. At a certain point I came to the conclusion that I had accomplished most of what I intended when I came on, and it was time for me to move on.
This turned out to be a hard problem. When would I leave? Where would I travel, and for how long? Where would I return to? What would I do? Would I meet Shalin in India in December? Should I buy a new couch? Would I move? Should I get a new housemate since Nadav moved out (and took said couch)? This made my head hurt. My long anticipated vacation was turning into a Problem. Then, while in Montreal, working with Vander and his team at EAM, I had a realization. I was facing a web of interrelated problems with no clear solution -- a system of equations with too many unknowns. In a flash of insight, I realized that as a professional designer, my job is to solve such non-trivial problems. That's why they pay me. So, I dug around in my designer's chest of problem solving tools and drew the above diagram. As you can see, the solution required pens of two different colors.
So, taking advantage of the fact that I was switching projects at EA, I quit, so as to minimize my departure's impact. I decided to move out of my apartment, put my things in storage, travel for three months to India and Israel, and then return to Berkeley to work on my own project for a year. And to make a clean break of it, it all starts on Jan. 1, 2008.
Posted by Chaim Gingold at 9:12 AM No comments: 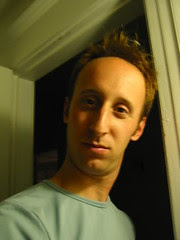 Chaim circa 2007
Originally uploaded by Chaim Gingold
Aha! The interweb. I feelt like it bein over ten years since I seen what them internets can do, what all those young kids what with their myspaces, flickers, and digital nick-nacks are twittering and flittering about.
When I was younger, if you wanted to post something on the web, you had to use unix, a text editor, manage a dns server, and, in short, endure all manner of technical hardships. And the results looked bad. Now it's so easy, I'm doing it by accident. flickr and blogspot deserve a joint nobel prize for today. I'm in love with technology all over again. Now if someone can just get the super fancy 1980's era "copy and paste" technology working in this text box, then we'll be totally good to go.
Posted by Chaim Gingold at 5:51 PM 2 comments: